Design Your Own Jolly Roger

Ships use different flags to signal other ships and identifying themselves. The “Jolly Roger” flag was flown to identify a pirate ship about to attack. 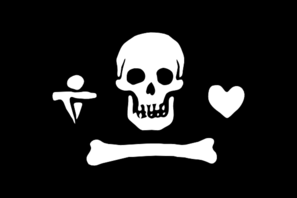 First draw your design on the drawing paper. Then cut your design out of felt and glue onto construction paper. After your pirates flag is dry tape it to a stick.